Jubilee year: on 30 April 2021, we celebrate the 120th anniversary of the first directed Hungarian film, A táncz (The Dance).

Since then, in every period countless outstanding artists have added to Hungarian film’s enviable reputation in the course of their careers in Hungary or internationally. The National Film Institute (NFI) is launching a series of programmes to commemorate these artists and their films.

In connection with the anniversary, Csaba Káel, government commissioner for the development of the Hungarian motion picture industry, quoted the words of author Mór Jókai from more than a century earlier: “These motion pictures are something truly marvellous, clambering over the white wall like beetles. When I first saw them in Nice, I was astonished, I was amazed at what this diabolical photography machine is capable of.” Csaba Káel added: “The motion picture enchants us over and over again, it is a never-ending miracle that has survived every technical revolution from the appearance of talkies through the explosion of television to the digital present-day networking everything. Recently, we reached another key moment in film history when we made the 120-year-old Hungarian film treasury accessible on FILMIO, the online streaming service of NFI.”

As the overture to the series of programmes celebrating 120 years of Hungarian filmmaking, the National Film Institute – in line with tradition – is organizing Hungarian Film Day on 30 April, the 120th anniversary of this red-letter day, when A táncz, the work by Béla Zsitkovszky and Gyula Pekár, was completed. Unfortunately, today only still photos have survived of the first Hungarian motion picture containing directed, dramatized scenes.

For more on A táncz go to: 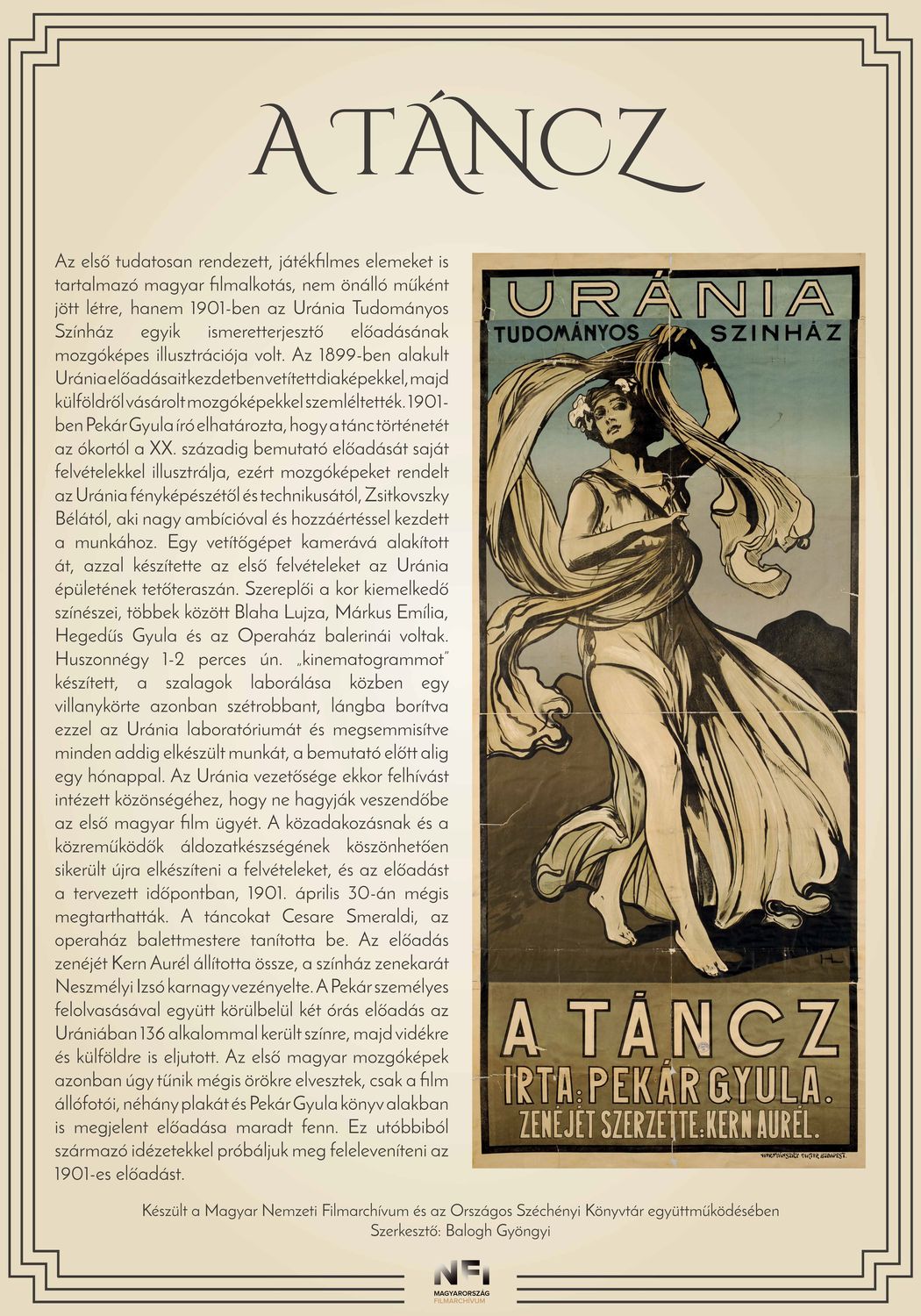 Within the framework of the jubilee year, the National Film Institute is launching the International Motion Picture Hungarica Research Programme with the aim of researching the Hungarian and Hungarian-related film history heritage, making it accessible and wherever possible, repatriating it. More than a third of all films made in the 120 years of Hungarian film history, including A táncz, the country’s first film, are assumed to be lost forever or are languishing in obscurity. “We are at the eleventh hour to discover, save and make available to today’s audiences and posterity our Hungarian works and motion picture values, which were created during the first 120 years of film history and are still languishing in obscurity somewhere in the world. The digitization of the collection, the active involvement of the National Film Institute - Film Archive in the International Federation of Film Archives and the online space provide all the conditions for locating and identifying films that we could not even have dreamed of decades ago,” said György Ráduly, director of the NFI Film Archive.

In July, a major film history exhibition – Wide Angle – opens in Ludwig Museum with the collaboration of NFI. The display covers the incredibly rich and dramatic story of Hungarian filmmaking from the earliest days to today. It presents the exciting period of the birth of film, the eras of film production and cinema history, as well as many artefacts. Huge international hits, world-famous artists who worked abroad and their impact on world cinema are all commemorated. An important accompanying programme supplements the exhibition. In the spirit of the broad promotion of motion picture culture, there will be screenings at the Ludwig Museum, Budapest Classics Film Marathon, Valley of Arts Festival in Kapolcs, in film clubs and outdoor venues around the country.

One of the primary objectives is to promote quality media consumption by the younger generation. The film history website of the National Film Institute, Core Films and the Klassz educational and youth programme provide a wide range of support material on the utilization of films in education. A new feature is that in 2021, selected films will be made available to schools for free.

To mark this significant anniversary, the National Film Institute has made a 12-part documentary series entitled The Adventurous History of Hungarian Film. Throughout the year the general public can learn more on Facebook about 120 special works selected from the Film Archive library, then longer, in-depth articles on these are being written for the 120 Years of Hungarian Film website.