Claudia Cardinale (Once Upon a Time in the West, 8½, The Leopard), Klaus Maria Brandauer (Mephisto, Colonel Redl, Out of Africa) and Jean-Marc Barr (The Big Blue), as well as Katinka Farago, Ingmar Bergman’s legendary – Hungarian born – colleague, are all coming to Budapest. Hungarian films restored by the Film Archive and Hungarian Filmlab will be screened along with masterpieces restored by other major European archives. This is the first opportunity to see the superbly restored Oscar-winning Mephisto, documentaries on such defining female characters of the film industry as Hedy Lamarr, the cream of the film history programme of the Cannes Film Festival is on show, and we can also learn about what inspired Wes Anderson during the filming of The Grand Budapest Hotel. All this and more at the 2nd Budapest Classics Film Marathon starting on 4 September. 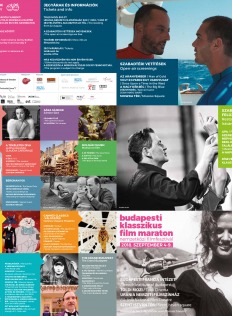