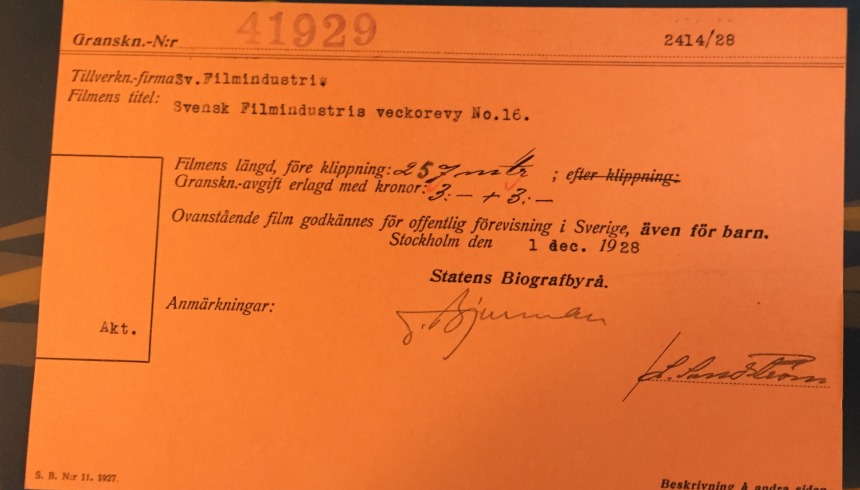 The Story of a Newsreel and Short Film Collection

In 1964, production and distribution company Svensk Filmindustri sold a collection of short non-fiction films on nitrate stock to Sveriges Radio, Sweden’s public broadcasting corporation. The collection included more than 5,000 reels, and the main item was the weekly newsreels of Svensk Filmindustri and its predecessor Svenska Biografteatern dating back to the mid 1910’s. Sveriges Radio duplicated all the elements onto 35mm safety stock in the 1960’s and 70’s and meticulously catalogued the content. The collection was used as a stock footage library and was re-edited, and newsreels were mixed with individual shorts. The Swedish Film Institute was offered the collection in the mid-1990’s but could not accept the deposit due to the absence of proper nitrate storage facilities at the time. In a rescue operation, the reels were shipped to Italy in the late 1990’s, and later to the US in the early 2000’s. The collection was repatriated to Sweden and the Swedish Film Institute in 2007. Since then, some of the items have been re-restored both photochemically and digitally with much better result than before, but much remains to be done, not least in terms of bringing order in the catalogue and clarifying the copyright situation.

Born in 1964. Studied literature, cinema and philosophy at Stockholm University. Began working at the Swedish Film Institute as a programmer in 1990, was Curator of the Institute’s Archival Film Collections 2003-2019, and is currently its Senior Curator. Member of the FIAF Programming and Access to Collections Commission 2005-2013, and member of the FIAF Executive Committee as Treasurer since 2013. Has curated programs and given lectures on Swedish films and on preservation and archival policy at numerous archives, festivals and conferences throughout the world, and has written several articles for Journal of Film Preservation and other publications.