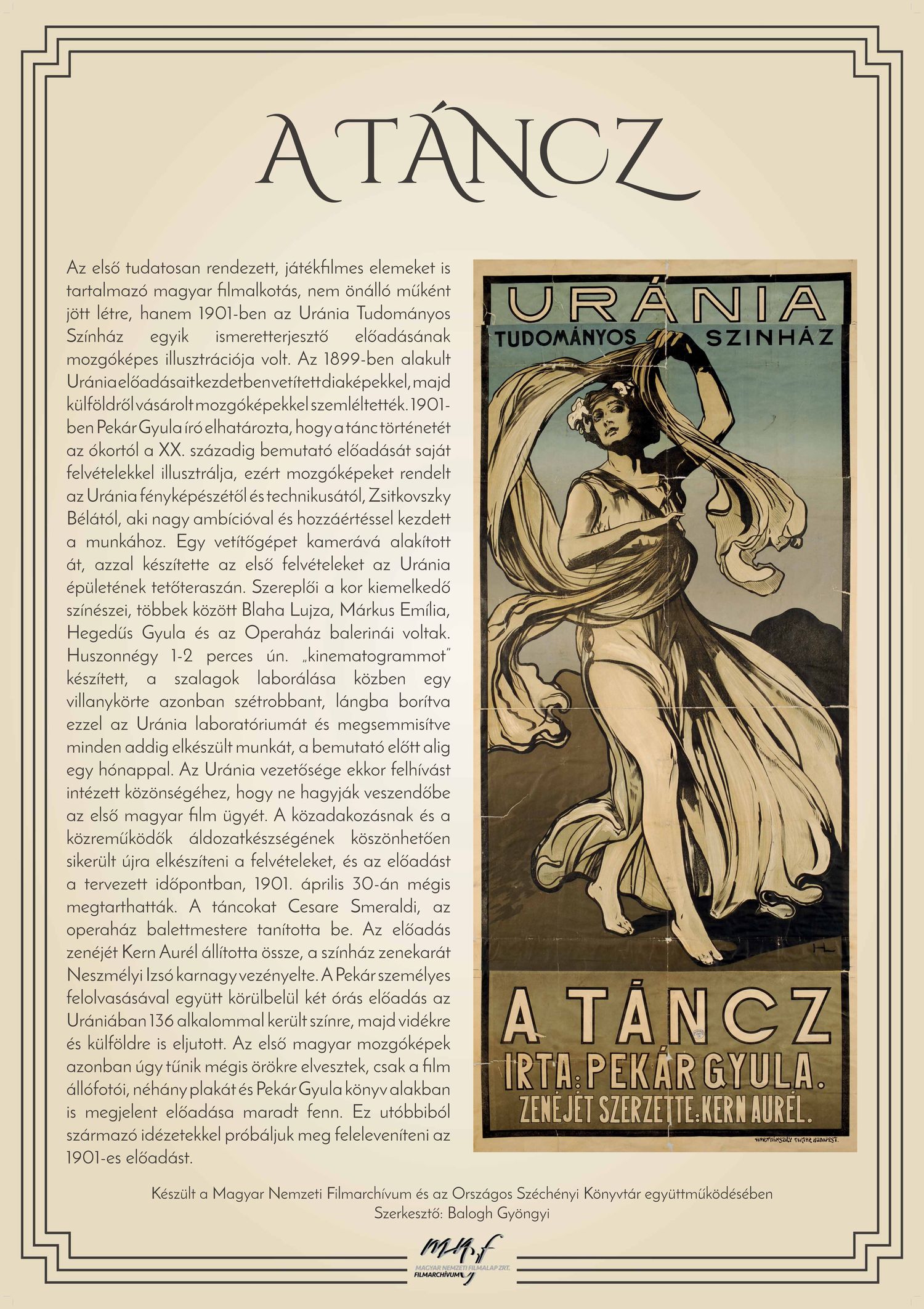 The first professionally directed Hungarian film containing feature film elements was created not as an independent work but as a moving image illustration for one of the series of educational lectures staged at the Uránia Theatre of Science in 1901. Initially, Uránia presentations were illustrated with projected slides, and then with moving pictures purchased from abroad.

In 1901, author Gyula Pekár decided to illustrate his lecture on the history of dance from Antiquity to the 20th century with his own film. He commissioned Béla Zsitkovszky, photographer and technician at Uránia, who undertook this project with enormous enthusiasm and expertise. He converted a projector into a camera and used this to take the first moving images on the roof terrace of Uránia. Those involved in this film shoot were leading actors of the age including Lujza Blaha, Emília Márkus, Gyula Hegedűs and ballerinas of the Opera House.

Zsitkovszky made 24, 1-2-minute-long so-called ‘cinematograms’. Unfortunately, during laboratory processing of the filmstrips a light bulb exploded and set fire to the Uránia laboratory, in the process destroying everything that had been completed, less than a month before the first lecture. The directorate of the Uránia issued an urgent appeal to its audience not to allow the first Hungarian film to be lost. Shots were remade thanks to public donations and the generosity of participants, thus the inaugural lecture could in the end be held as originally planned, on 30 April 1901.

Cesare Smeraldi, ballet master at the Opera House, taught the dance moves. Aurél Kern compiled the music and Izsó Neszmélyi conducted the theatre’s own orchestra. The two-hour presentation complete with personal reading by Pekár was staged at the Uránia on 136 occasions, after which it was taken on tour to the provinces and then abroad. Tragically, the first Hungarian moving images appear to have been lost forever; only the film’s still photos, a few posters and Gyula Pekár’s lecture published in book form have survived. We have attempted to revive the performance from 1901 using parts extracted from this book.