From Hyppolit to Hollywood – István Székely born 120 years ago

His film Hyppolit the Butler triggered an unprecedented golden age of film in Hungary. Under his influence, comedy became the dominant genre in Hungarian filmmaking, but he actually also experimented with other genres and didn’t stop until he reached Hollywood.

Since his father, the renowned architect Marcell Székely, was the designer of numerous public buildings and apartments in Budapest, it was decided that he, too, would pursue this career. He started higher education at the Technical University but never completed the course, becoming instead a journalist. In the late 1920s he was Berlin correspondent for Az Újság, and this is where he came into contact with film production. Between 1929-1932 he worked on four films as screenwriter and director (Die große Sensucht, Der Nächste, bitte!, Rhapsodie der Liebe, Seitensprünge). 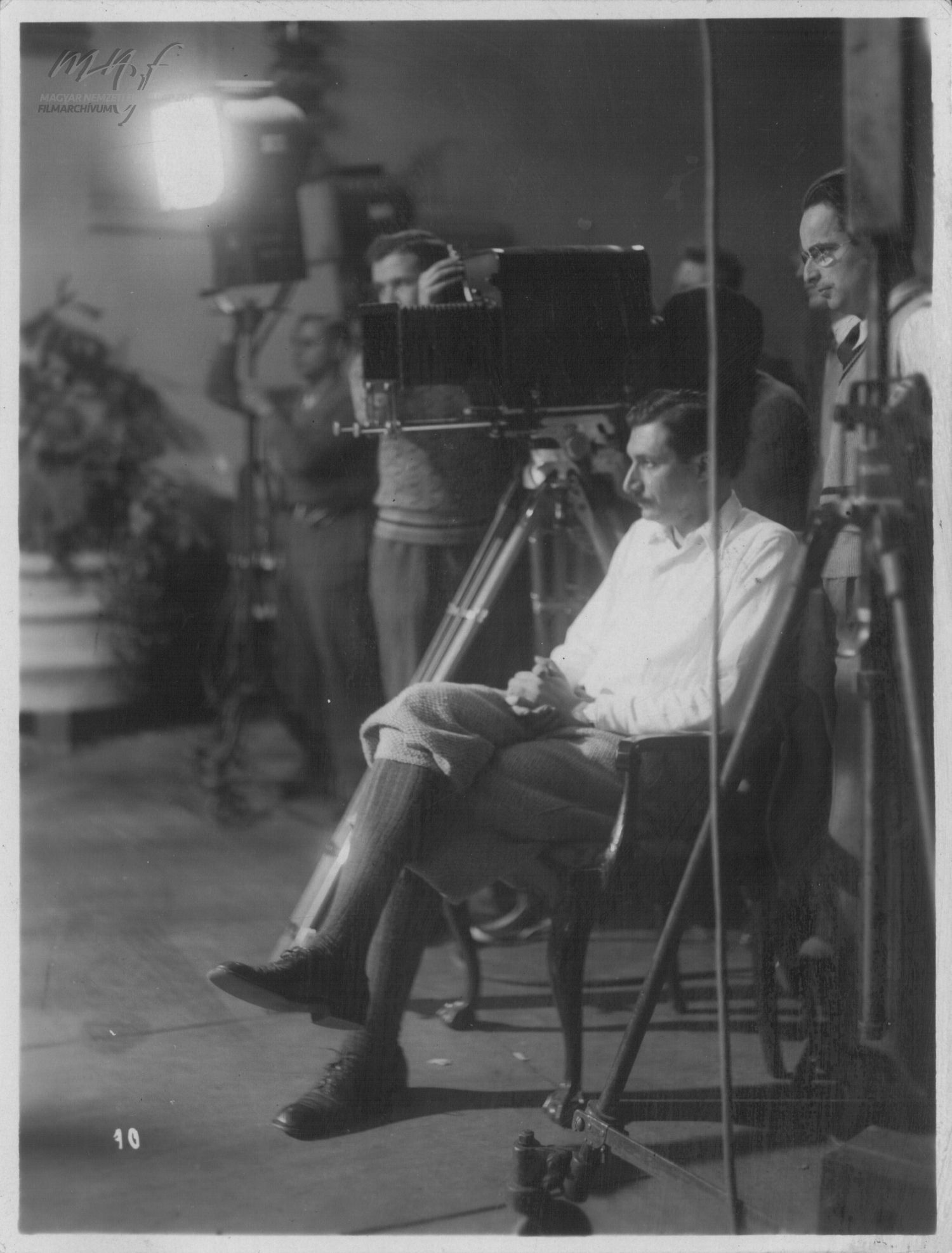 He debuted in Hungary with Hyppolit the Butler and his meteoric rise to fame was due to the success of this film. In the wake of the crisis in Hungarian silent filmmaking of the 1920s and the failure of the first Hungarian talkie, Kék bálvány/The Blue Idol, the massive box office success of Hyppolit proved to be a turning point, triggering an unprecedented golden age of film in Hungary. In fact, this film established the tone of Hungarian bourgeoise comedy that came to define Hungarian filmmaking throughout the 1930s.

Evergreen catchphrases, the unique interwar period, a world where one eats onions with onions and where appearances have to be kept up at any cost. Even today, the nth generation can still hum “Pá, kisaranyom, pá” and root for young love alongside the clumsy, social climbing petit bourgeoisie. The first resounding success of Hungarian film starred the immortal Gyula Kabos and Gyula Csortos.

After completing Hyppolit, for a time Székely commuted back and forth between Berlin and Budapest, finally resettling in Budapest in 1933 only after Hitler’s rise to power. In the early 1930s, István Székely became the leading star director of Hungarian filmmaking. He was extremely prolific. Up until his emigration to America, he alone directed a quarter (24) of the approximately 100 films shot in Hungary.

The majority of his films are comedies (Piri mindent tud/Piri Knows Everything, Ida regénye/My Wife the Miss, Nászút féláron/Half-rate Honeymoon, Lovagias ügy/Affair of Honour, Egy lány elindul/Heart for Heart etc.), in which he strived to depict in an atmospheric, realistic way the urban man in the street. All were hits, but nothing surpassed the success of Hyppolit. Originally, the synopsis of Meseautó/Car of Dreams was passed to Székely, but he rejected it saying the basic premise of the movie, that a small showroom in Pest would give away a luxury car to the 10,000th customer, was simply unbelievable. In his memoirs published in 1978 (Hyppolittól a Lila ákácig/From Hyppolite to Purple Lilacs), it transpired that he later regretted this decision. In the end the film was directed by Béla Gaál, the greatest Hungarian master of trivial glamour moviemaking, and it became the second massive audience hit of the period.

Although as a consequence of Székely’s Hyppolit, comedy became the dominant film genre in Hungarian filmmaking, he was the first to experiment with other genres as well. In seeking a competitive Central European form of the crime thriller film, he made an adaptation of Gaston Leroux’s novel Rouletabille aviateur (Repülő arany/Flying Gold, 1932), of which a French version was also shot. Hungarian and German versions of Scandal in Budapest (1933) were made in a Hungarian-German-American co-production; he attempted to adopt the American commercial style. (Unfortunately, the Hungarian version has not survived.) Rákóczi induló/Rákóczi March (1933) accurately put its finger on the national tone.

In his memoirs From Hyppolit to Purple Lilacs, István Székely had this to say about the film: “Many were put out that as a liberal individual I had made such a blaring nationalistic film, virtually the opposite of Hyppolit.” However, the film’s success proved his choice of subject had been correct: the light, pleasant Herczeg adaptation, a genre reaching its zenith in the joint films of John Ford and John Wayne, a close relative of the military Western, won over audience profiles that until then had not been tapped by the cinema, that is, provincial notaries, landowners, civil servants, in general, the so-called middle class. Due to its subject and the prestige of Ferenc Herczeg, the film, the premiere of which was attended by Regent Miklós Horthy, was shown at the 1934 Venice film festival.

Bál a Savoyban/Ball at the Savoy (1934) is a transition between the Lubitsch-style operetta film and revue film. Set in the First World War, Only One Night/Café Moszkva (1935) is a grandiose melodrama that stylistically speaking tended towards film noir.

“Gyula Kabos (...) It remained an everlasting sorrow that he was always treated as a comic whereas he wanted to become one of the immortals with grand dramatic acting. That is why the film Affair of Honour has special importance in his career. On the one hand, because he received a leading role in it, and on the other hand, anyone who paid attention (...) noticed that Kabos did not play his usual role. The character he shaped is sad, miserable, and what is more, worthy of our pity. It is true that the film was built not from the usual two-week toil of a screenwriter but from noble raw materials: one of Sándor Hunyady’s dramas. Of course, the film writers significantly distorted the original work to make it more ‘cinema-friendly’, which is why the story in itself became shallow, but they created a role for Kabos in which the actor showed that he could not only entertain but also be thought-provoking.” (prae.hu)

He is also associated with several fine literary adaptations, including the film version of Ernő Szép’s Purple Lilacs, which was reshot in 1972. The 1936 film version of Móricz’s novel Légy jó mindhalálig/Be Good Until Death is a forerunner of Neorealism with its images of poverty, injustice and abuse of power. He adapted Jenő Heltai’s novel A 111-es/In Room 111 and Lajos Zilahy’s Két fogoly/Two Prisoners, and he made the hugely popular film adaptation of the Mikszáth novel Noszty-fiú esete Tóth Marival/The Case of the Noszty Boy with Mari Tóth.

Early on, creators of sound film that terminated the internationalism of silent movies believed they could overcome the linguistic limitations of the talkies by making so-called multi-version films. Some films by István Székely were made in different language versions: the same film was shot on the same sets but with different casts. The fashion for multi-version films lasted until the late 1930s. A full list of multi-version films shot in Hungary can be read here.

After the Jewish laws were passed, he emigrated to the USA in 1938. As Steve Sekely, he was a member of the second generation of Budapest directors to make a world career in Hollywood. Today, his low budget but psychologically effective and highly professionally produced films are considered classics of the horror, musical and film noir genres (Revenge of the Zombies, Waterfront, Lake Placid Serenade, Hollow Triumph etc.) He set up a film studio (Star Pictures) in 1945. He worked in Mexico in 1950, in West Germany in 1953, in Italy between 1954-1955, and in England in 1962.

He made his last film in Hungary, a new version of Purple Lilacs, in 1972. István Székely died in Palm Springs on 11 March 1979.