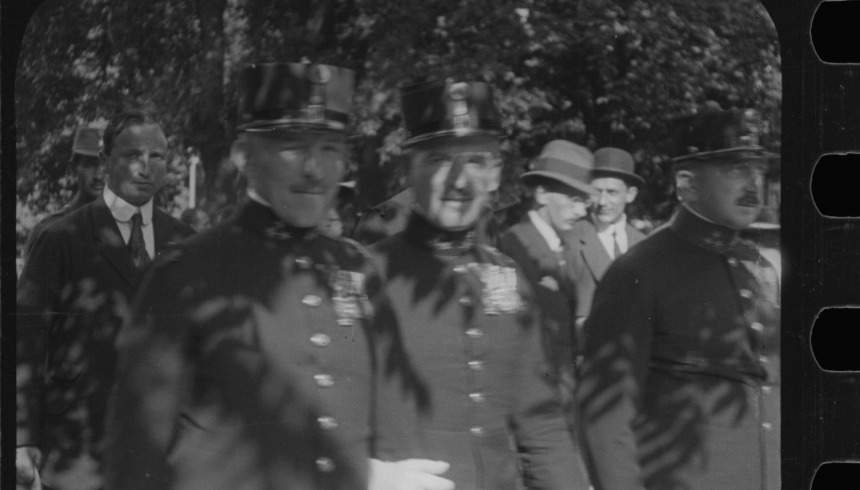 Research and reconstruction of the earliest film footage and newsreels of Hungary began in 2016 in connection with an exhibition. Researchers of the Hungarian National Museum and Film Archive made an analytical version of a documentary about the coronation of King Charles IV (1916) on the centenary of the event. The version was successfully reconstructed from takes of prints deriving from different sources. This experiment gave the Film Archive the idea, in 2018, of researching the background to the 1918-19 newsreels, the first relatively intact season in the history of Hungarian newsreels, and presenting to the general public what happened exactly 100 years earlier. In the meantime, ten reels of original camera negatives turned up in our own nitro-film storage depot, which after digitization proved to be in large part the missing shots of this newsreel season it was assumed had been lost. From this moment, it was possible to consider a complete reconstruction of this newsreel season comprising several series. While this was going on, research was expanded to cover the earliest surviving film footage taken in Hungary by the Lumière company and the earliest ‘regular’ Hungarian newsreel series, Kino-Riport appearing from 1913. Since we hold very little film material from this early period, and specifically from the latter series, in our archives, following in-depth background research we launched the project ‘Most Wanted - Non Fiction’ with the aim of locating these film reports, mostly known only by their titles, which we thought might be languishing, unidentified, in collections abroad. My presentation examines what chances we have of expanding and reconstructing to the greatest possible extent the collection of Hungarian documentaries from the earliest period, furthermore, what opportunities are at our disposal to make this material more widely known and increase its popularity. She has been lead researcher at the National Film Institute Hungary – Film Archive (Budapest) since 2018. Her main field of study covers the earliest film footage and newsreels of Hungary. She is editor of the series Filmhíradók 100 éve (100-year-old Newsreels). After graduating from university, she worked as a member of staff at Hungarian Television for 17 years, during which time she acquired considerable experience in the research and utilization of archive news and documentary recordings while making programmes. She is able to exploit this experience in her current job.