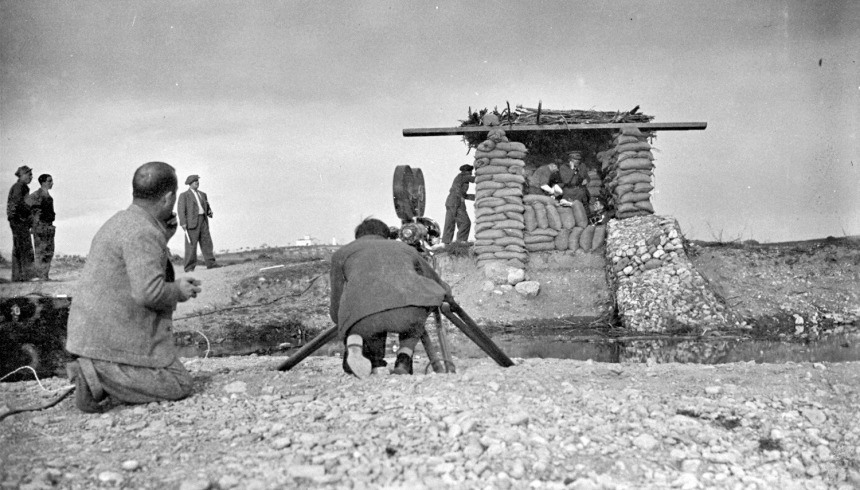 Laya Films was the film division of the Catalan Government's Propaganda Commissariat during the Spanish Civil War. Directed by Joan Castanyer, this company generated a weekly newsreel from December 1936 to January 1939, in addition to about twenty thematic documentaries. Its aim was to reflect the information of the military front but also the cultural traditions threatened by international fascism; versions were made in Catalan and Spanish but also in French and English to demand the attention of international democracies. In turn, Laya Films was the result of an alliance between Catalan republicans and communists to counter the anarchist monopoly in the film industry. After Franco’s victory, the material was moved to Madrid where, after the dictatorship, it partially reappeared and reassembled into thematic blocks that make it difficult to catalog in its original format. Complementary identification techniques and the location of new copies helped to clear up some doubts about one of the main collections of Filmoteca de Catalunya. Esteve Riambau is Professor of Audiovisual Communication at the Autonomous University of Barcelona and, since 2010, is the director of the Filmoteca de Catalunya. Between 2011 and 2017 he belonged to the FIAF Executive Committee. He has co-directed the feature films La doble vida del faquir (2005) and Màscares (2009) and the television series La gran Illusió. Intermittent account of Catalan cinema (2018). He has lectured at various international universities and is the author of forty books on the History of Cinema, the last of which is Laya Films and Cinema in Catalonia during the Spanish Civil War (2018).