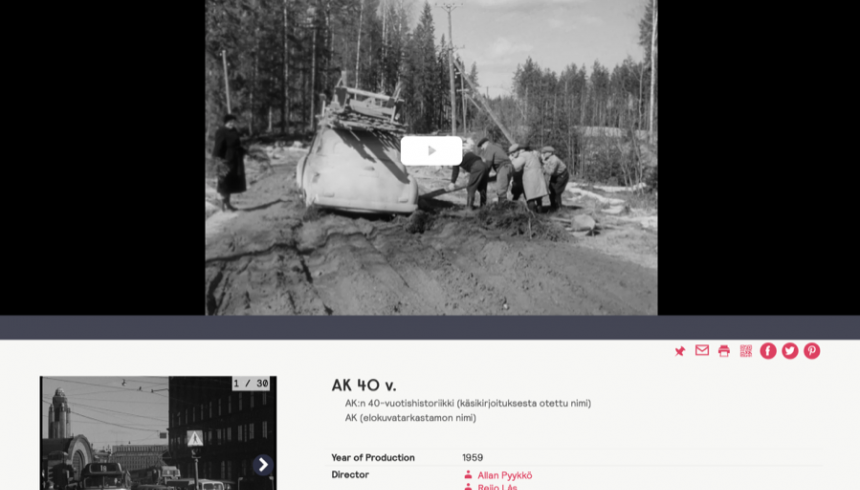 The National Audiovisual Institute (KAVI) in Helsinki started digitizing its film collections in 2011. The online streaming services Elävä muisti (Memory in Motion) and Elonet were introduced in 2017 and 2019 respectively. Since then, nearly 3,000 films have been released.

Besides feature films, KAVI has a collection of tens of thousands of non-fiction titles with film elements. In 2008, a digital strategy was introduced to develop KAVI into a hybrid archive for both analogue and digital films with emphasis on digital access. A digitizing workflow was set up in 4K, and the same set of standards were used for both feature and non-fiction films.

Being the rights holder to a major part of Finnish film history, KAVI has been able to release much of what it digitizes. KAVI’s major non-fiction collections are the Defence Forces films, and the short film and newsreels collection of the historic production company Suomi-Filmi.

Even with KAVI’s emphasis on feature films, non-fiction titles have gained more and more attention, and soon became more popular than fiction, first on DVD releases and later on the streaming services.

Pekka Tähtinen is a senior advisor and the head of digitisation and digital restoration at KAVI. He has a background in engineering and he holds an M.Sc. degree in Telecommunications Engineering from the Helsinki University of Technology. Pekka had an important role in launching and managing the on-going in-house film digitisation processes at KAVI, one of the first full 4K workflows among film archives. He’s also the product owner of KAVI’s digital archiving systems and online services, such as the vod-service and filmographic database Elonet.fi.