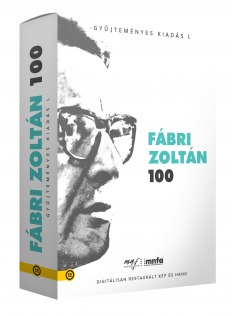 Collection of five DVD's: Merry-Go-Round, Professor Hannibál, Anna, Two Half-Times in Hell, Bonus features. The first collection of the oeuvre series produced on the occasion of the 100th anniversary of his birth contains the most extinguished early Fábri-classics made between 1955 and 1961, completely restored, and accompanied by a great number of both, contemporary and freshly produced, bonus features.

“Turning to eternal themes of mankind, Zoltán Fábri brings them to life by virtue of some irresistible poetry.” – André Bazin

“Behold, the Grand Prix-winning film, my Grand Prix-winning film… The heroine of Zoltán Fábri’s marvellous film would have deserved the prize for the best actress... the way she danced, laughed and cried, due to her freshness, purity, spontaneity...” – wrote François Truffaut, the later leading figure of the new wave, offering his imaginary Golden Palm to Merry-Go-Round.

An icon of Hungarian filmmaking, this film was based on a short story written by Imre Sarkadi. In the story, taking place during the government of Imre Nagy, the enforcement of agricultural cooperatives is just a framework for the director to bring to life, in a rural story of Romeo and Juliet, whatever he wanted to pronounce about freedom, about the right of happiness, about traditions handed down from century to century, about man being at the mercy of powers beyond him.

This outstanding Hungarian classic was first shown on 18th October 1956, preceded in the programme by footages documenting Rajk’s funeral, which can be found among the bonus features of this DVD. The film was swept away by the revolution. As soon as in August 1957, however, it was to be distributed under the slogan: “An outcry against the fascism of all times.”

In order to feature the fortunes of Béla Nyúl, a marginal Latin teacher, father of four children, Fábri speaks about the show trials and methods under Rákosi’s dictatorship by referring the story to the pre-fascist movement of the Awakening Hungarians. His film is one of the first film parables, modern also in terms of its visual language, highlighting with unbelievable sensitivity how easily the affections of the crowds can be manipulated.

“From the very moment when Anna turns up in the story, everything you see is presented from her point of view... My purpose was to make the viewer experience along with her the complicated psychological process she is undergoing: the mental stages of heart-sickening solitude, of endless humiliation, of suddenly awakening love, of sudden ecstasy, of the pangs of love, of forsakenness, of ultimate deprivation, and of final exaltation.” (Zoltán Fábri)

After World War I, Anna is forced to enter service with the Vízis, her new masters. Denying her past, humiliated in her love, caught up in terrible revolt, she kills her masters in a moment of mental derangement.

“The way Dió, being offered a piece of extra cheese and a ball, his hand wavering for just a moment, seizes the ball instead of the bite... the way the common sight and excitement of a football match transcends into a fight for life or death, is unforgettable.” László Bóka, Filmvilág, 01.11./1961

The subject matter was taken by Péter Bacsó relying on real events. In Ukraine in World War II, the German commando wants to celebrate Hitler’s birthday by arranging a football match. They set up a football team recruited from a forced labour camp company to play against a team of German soldiers. Led by Ónodi II (Dió), a football legend of the national team, the Hungarian prisoners’ team defeats the Germans, who, afraid of rebellion, start shooting the members of the victorious Hungarian team one by one.

Screen Tests for Merry-Go-Round (1955)
Peace Loan. Hungarian Newsreel 6/39/1955
Screen Tests for Professor Hannibál (1956)
Trailer to Professor Hannibál (1956)
The Funeral of László Rajk and his associates, Hungarian Newsreel (1956)
Screen Tests for Anna (1958)
Behind the scenes of the Film Archive and of the Film Laboratory. The restoration of Merry-Go-Round (2017)
“We are flying, Mary!” – István Szabó about Zoltán Fábri (2017)
They were heroes – Sándor Csukás, director of photography, about Zoltán Fábri and Ferenc Szécsényi (2017)

“Whenever there is a way, I try to make films in order to raise my voice against the humiliation of man by man, against anyone’s being at the mercy of others. By no means do I nurture any illusion as if this could be stopped by films or even by hundreds of films, but still there is the call of an inner ethic order, to make aware or thoughtful, since in man there is the inclination, due to his cowardice, lack of faith, fears and an instilled tendency of prejudice, to become a stranger to his own life, to his freer options, even if he has the chance to insist on them.” (Zoltán Fábri: Improvised Self-Confession, in: Új Írás, 8 May 1991)