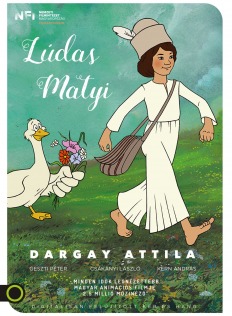 Mihály Fazekas’ narrative poem features funny characters: in Döbrögi, all evil is revealed with hilarious irony in the quintessence of country bailiffs and overseers. The director smuggled himself into all of his fairytale films: the traits of Mattie’s goose shows similarities. Mattie, the sly and handsome hero of the film, as well as the other characters were designed by Marcell Jankovics. With an admission rate of 2.5 million, Mattie the Goose-Boy has become the most popular feature-length Hungarian cartoon ever.