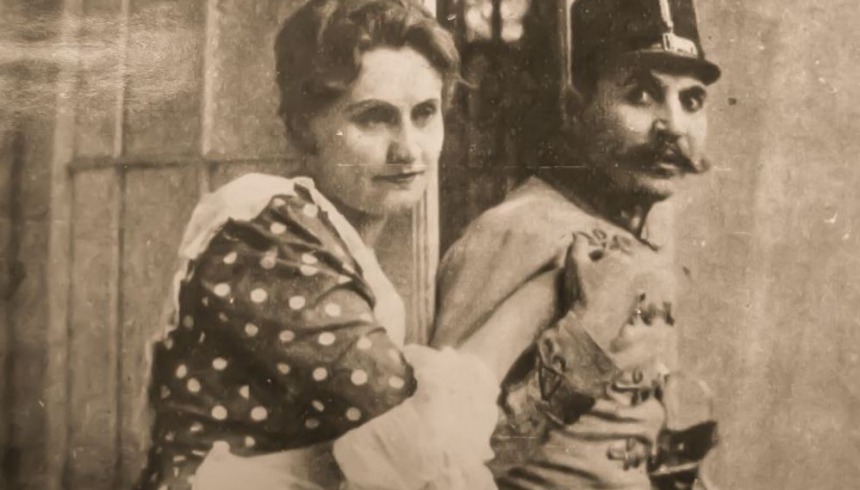 Plot
Mrs. Gyurkovics is travelling home with her daughter, Kata. In the same carriage is Colonel Radványi who is startled by the girl’s beauty. The fourth Gyurkovics girl, Mici, is also on her way home from the Pest institute. On the way she meets Horkay, who is similarly bound for Bácstamás to buy horses. Soon the Gyurkovics household is thrown into confusion at the news that hussars are coming to Bácstamás, meaning balls, music, entertainment and perhaps suitors. At the same time, they are expecting a guest, a distant relative of the family from Transylvania, Tóni Kelemen, who they do not know in person. Horkay visits Mici. They think that the handsome young man is Tóni Kelemen, and he soon becomes the favourite of the Gyurkovics sisters. Gida, the foster son of Colonel Radványi, quits the school leaving exam to travel to Bácstamás. He has long been in love with Kata. Kata considers the young man to be immature because so far he did not even dare court the girl. Mici and Horkay resort to a trick in order to get Gida to speak out. However, the scheme misfires because in the meantime Colonel Radványi arrives to settle accounts with Mrs. Gyurkovics because they want to catch his son and make him a husband. The angry colonel meets Kata first and immediately calms down, indeed, he gets tangled up in a confession of love and asks for Kata’s hand in marriage. The next scene plays out in Radványi mansion where the whole Gyurkovics family are guests. Gida, in order to get over his disappointment in love caused by Kata, first makes every effort to court Sári and once she is engaged to Sándorffy, he begins to woo Ella. The two couples go to a fancy-dress ball. Gida, dressed as a knight in armour, serenades Ella. The music is at its height when Radványi and Sándorffy get home. They start chasing the mysterious troubadour, who hides in the girls’ room. Mrs. Gyurkovics also turns up in the middle of this caper and immediately finds the hidden Gida. There is only one way out of the scandal: Gida has to marry Ella. At the wedding, Horkay finds himself alone with Mici and reminds her of their previous vow, that the girl will kiss him once all her sisters have been married off. Since all her sisters are now wed, he requests the promised kiss and then asks her to marry him. No sooner have Ella and Gida departed on their honeymoon than Mici’s wedding starts.

What makes it interesting?
The motion picture adaptation of the hugely popular Ferenc Herczeg work was shot in Corvin Film Studio. A Swedish-German film version of the story was also made in 1926, in which Willy Fritsch played the part of Horkay.