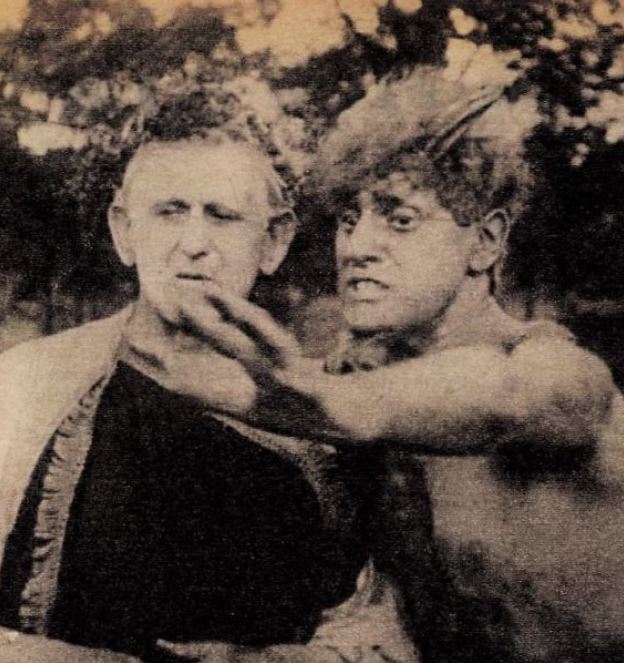 Plot
The first act is set in mythological times. The gods take pity on Pan, who is hopelessly in love with a nymph, and to spare him further pain they transform him into stone. From the second act onwards the story is set in the present day: two men are sparring for the favour of Lucy Gordon, America’s most famous dancer. Archaeologist Fred Morgan and adventurer Harry O’ Conell. Fred Morgan is taking Lucy an ancient Etruscan vase when he is attacked. In the heat of battle the vase is smashed and a papyrus scroll rolls out. The two rivals fight heatedly for the manuscript. In the end Fred Morgan wins, then on the basis of the instructions given in the papyrus he excavates – in what was once Arcadia – and takes to New York the ancient statue that, according to tradition, is the fossilized body of the god Pan. Lucy Gordon is appearing in a dance pantomime in a New York theatre. Just before the premiere a set sculpture is broken and in order to save the performance, Fred lends the theatre the valuable Pan statue brought from Greece. The moment arrives, the curtain goes up and Lucy Gordon takes to the stage. Pan recognizes in her his one-time love, the nymph. The magical similarity and beautiful dancing bring the stone statue to life, and after millennia Pan finds himself in the modern world. The revival of the statue at the premiere causes huge consternation. Fred leaps from his box onto the stage to protect Lucy. Things slowly settle down and the premiere ends as a success. After the performance Fred proposes to Lucy. The first film by Pál Fejős starred the German actress Claire Bauroff, whose popular dance matinees inspired the story.

What makes it interesting?
The first film by Pál Fejős starred the German actress Claire Bauroff, whose popular dance matinees inspired the story.