A major producer who started with Jókai films in Hungary and went on to work with stars in Vienna. 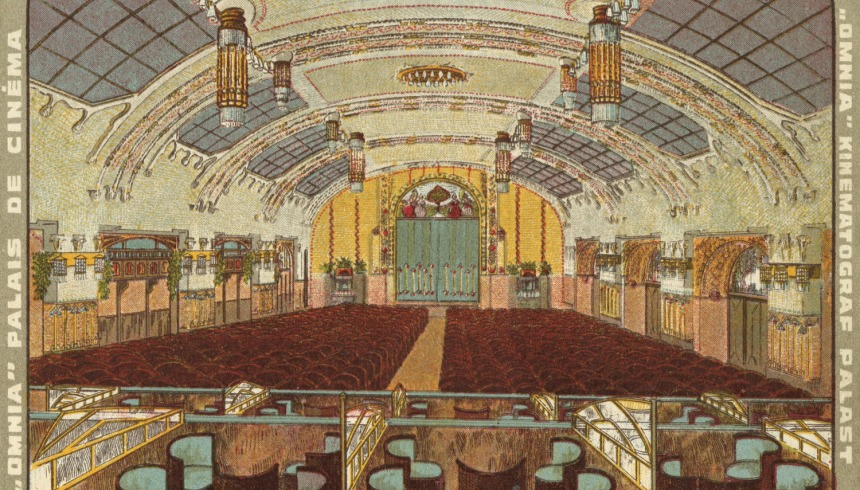 He started out as an attorney but discovered his true vocation in the movie profession. Together with Ferenc Cantor and backed by Projectograph Rt., he founded the Budapest Omnia picture theatre in 1908. This beautiful, Art Nouveau cinema operated out of the old Intim Theatre at 31 József Boulevard (Kölcsey u. 8.) in the VIII district of the capital.

After launching the cinema, Szücs became commercial director of Uher Film Studio where as producer he played a role in bringing, for instance, Jókai adaptations to the screen. In 1916, Mozihét published a detailed article on the shooting of the film When We Grow Old (Mire megvénülünk, director: Ödön Uher Jr., 1916), in which he urged the filming of quality Hungarian literary works:

“Hungarian cinematography outgrew its infancy and suddenly matured. The early days were difficult because they started in the most difficult way. Those who were looking for content for Hungarian films started by looking towards masterpieces of Hungarian literature and this is how Hungarian cinematography became the greatest apostle of Hungarian literature. The first Hungarian literary film, which was very well received abroad as well, was Poor Rich [Szegény gazdagok] made last season, which due to war-related obstacles, proclaimed the eternal glories of Mór Jókai within a limited territory, in the countries of the Central Powers, and induced particular interest in Hungarian literature. This enormous success encouraged enthusiastic pioneers to make a second great Jókai film and one of Jókai’s most popular novels, When We Grow Old, already had its premiere last Tuesday.
I refrain from critiquing the film, on the one hand because perhaps I would be biased, or rather those who on principle have the strictest criticism of Hungarian films would consider me biased. But also because with these lines I would prefer to urge all those who can to fish out the true pearls from the sea of Hungarian literature.”1

We don’t know for precisely what reason, but in 1921 Ernő Szücs moved to Vienna where he was appointed managing director of Vita-Film studio. Vita-Film was founded in 1919 by Anton and Luise Kolm, former managers of the first great Viennese film studio, Wiener Kunstfilm. The company started strongly and thanks to its grandiose productions it soon became a serious rival to the market leader Sascha-Film. It had offshoots in Berlin, Istanbul and New York, as well as representatives working in London, Paris, Budapest, Prague, Bucharest and Belgrade. Szücs continued his collaboration with the Hungarian Projectograph company even during his years in Vienna and they became distributors of Vita-Film productions in Hungary. 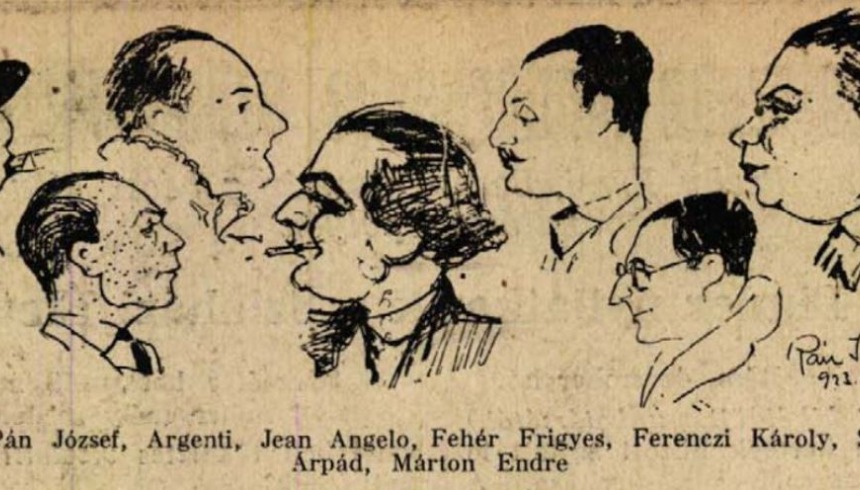 Drawing by József Pán of the Hungarian staff of Vita-Film 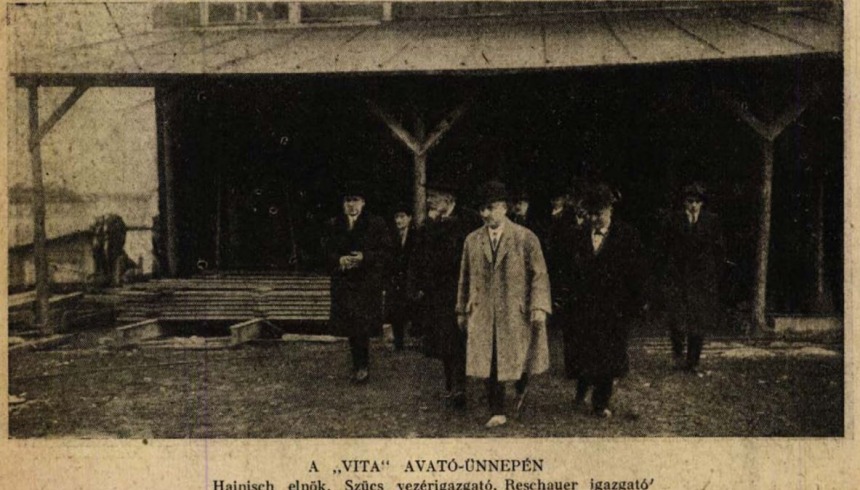 At the inauguration of the "Vita" 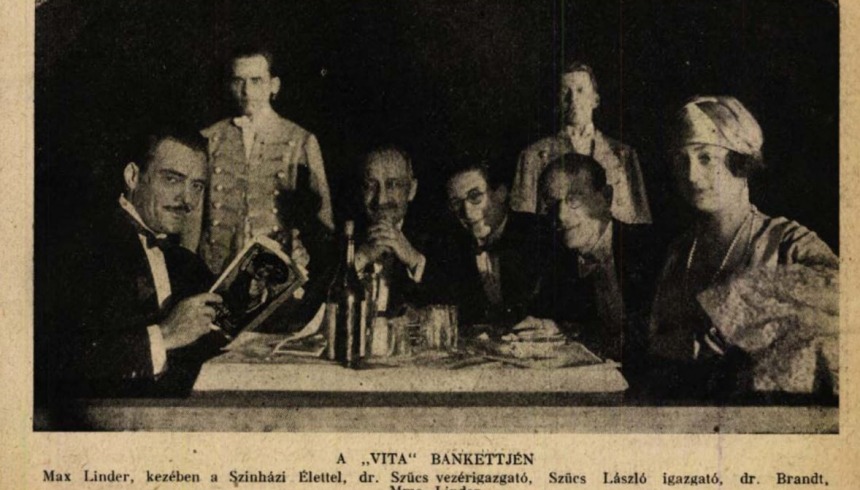 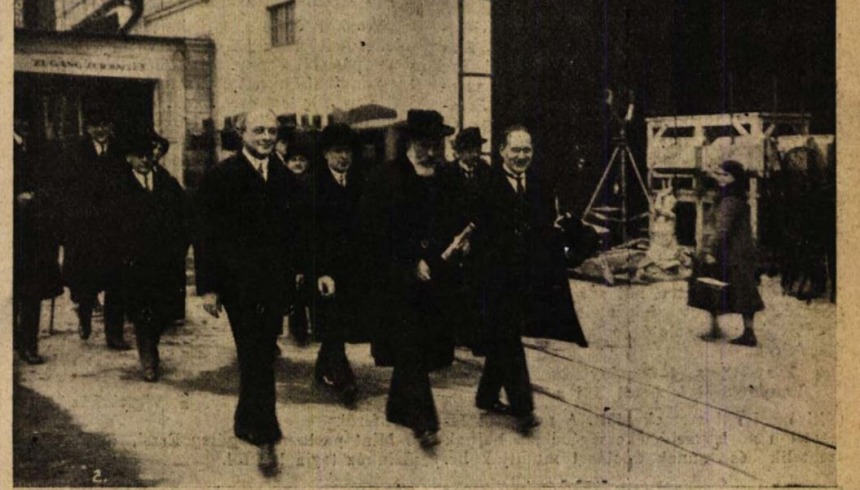 The art nouveau interior of the Omnia cinema in Budapest 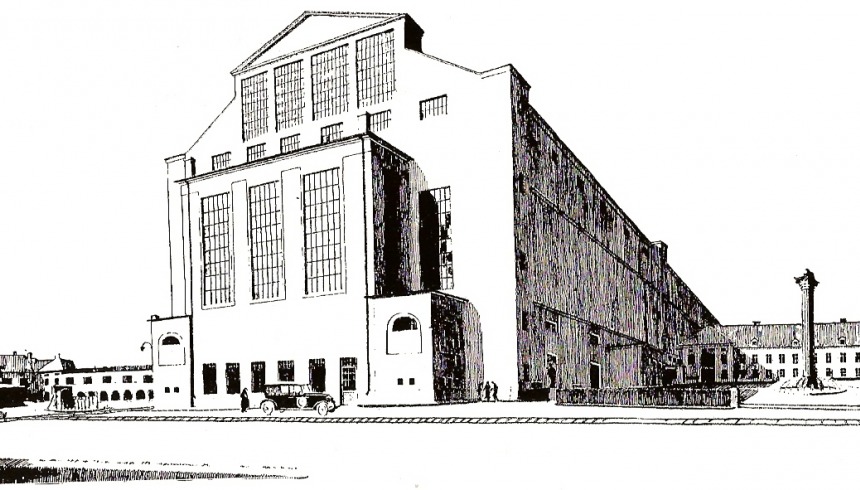 The Rosenhügel studio, built in 1923 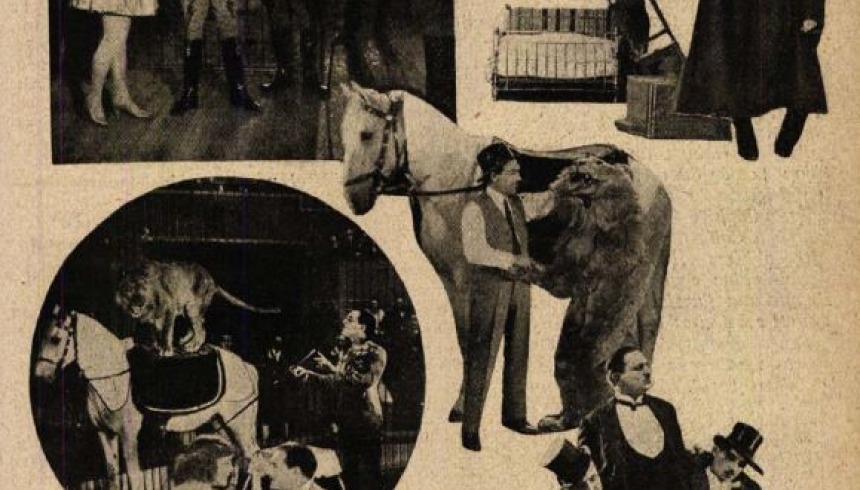 One of Vita-Films greatest projects, the monumental Samson and Delilah (Samson und Delila, director: Alexander Korda) was shot in a part of the studio that was still being built in 1922. In this silent movie Delilah is played by Korda’s wife, María Corda (Antónia Farkas), and it also featured Paul Lukas (Pál Lukács), cinematographer Nicolas Farkas (Miklós Farkas), writer Korda and Ernest Vajda (Ernő Vajda), and its producer was a certain ‘N. Szucs’, who we can assume is Ernő Szücs.2

Vita-Film completed construction of the legendary Rosenhügel studio in 1923. For many decades it was one of the key institutions of filmmaking in Austria and it survived right up to the 2010s. At the inaugural banquet for the studio a correspondent of Színházi Élet reported enthusiastically about the studio’s astonishing technical equipment, lighting and pool even suitable for taking underwater footage. The lavish occasion, which the correspondent likened to the world of One Thousand and One Nights, also served as the backdrop to a film shoot because scenes from Hotel Potemkin (director: Max Neufeld, 1924) were recorded in the midst of the celebrations. The report goes on to recount that among the revellers was French comedian Max Linder and numerous Hungarian filmmakers. Many were regular employees or contracted actors of Vita-Film. Managing director Ernő Szücs held a key position, László Szücs was responsible for distribution abroad, other staff of the studio included chief director Frigyes Fehér, director Endre Marton, cinematographer József Bécsi, set designer Sándor Ferenczy, painters József Pán and Árpád Ékes, while Vilma Bánky, Oszkár Beregi and Gyula Szőreghy acted in films.

In the first half of the 1920s, the company tried to maintain its competitiveness by invited famous foreign artists to participate in productions. This is how famous French filmmakers Germaine Dulac (Die sterbende Sonne, 1923), Jean Legrand (Das Haus im Walde, 1923) and Séverin-Mars (Horoga, 1923) came to work here along with Belgian Jacques Feyder, who shot the Hungarian themed Das Bildnis (1924) in the Rosenhügel studio and in Nyíregyháza.

King of the Circus

Vilma Bánky, who went on to become a famous Hollywood star, played in this and another three Vita films – Hotel Potemkin, Das verbotene Land, Max, der Zirkuskönig3 – between 1923–24. This time in Vienna represented her first serious test in a professional international milieu. Of the films that Szücs was involved with Max, der Zirkuskönig was particularly important, in which Bánky is partnered with the famous French comedian Max Linder. The film takes place in a circus where the drunkard Max falls in love with the circus director’s daughter, Ketty, and has to prove that he is worthy of her love. Ketty is played by Vilma Bánky and the circus director by Gyula Szőreghy, the set designer was Sándor Ferenczy and József Bécsi was one of the cinematographers. The role did much to increase Bánky’s fame but at the same time it marked a sad end to the career of the legendary Max Linder. This was his final full length feature film; during shooting he failed in an attempted suicide but just one year later he succeeded in killing himself.

Lobster Films spent a decade restoring the film long thought to have been lost and known only from a few fragments, working from material gathered from 11 different sources. The premiere of the restored version was held at the Pordenone Silent Film Festival on 8 October 2021.

Vita-Film was declared bankrupt in 1924, barely a year after the opening of the studio. It had become evident that despite every effort and bringing in international stars for productions, the company still couldn’t compete with the flood of movies from America. The talented Ernő Szücs remained in film distribution even after the closure of Vita and he continued to work in Vienna and Berlin.

The first Hungarian international star had a career in Hollywood that only few others enjoyed. Her portrait featured on the front covers of magazines from South America to Japan and people thronged the cinemas to see her.